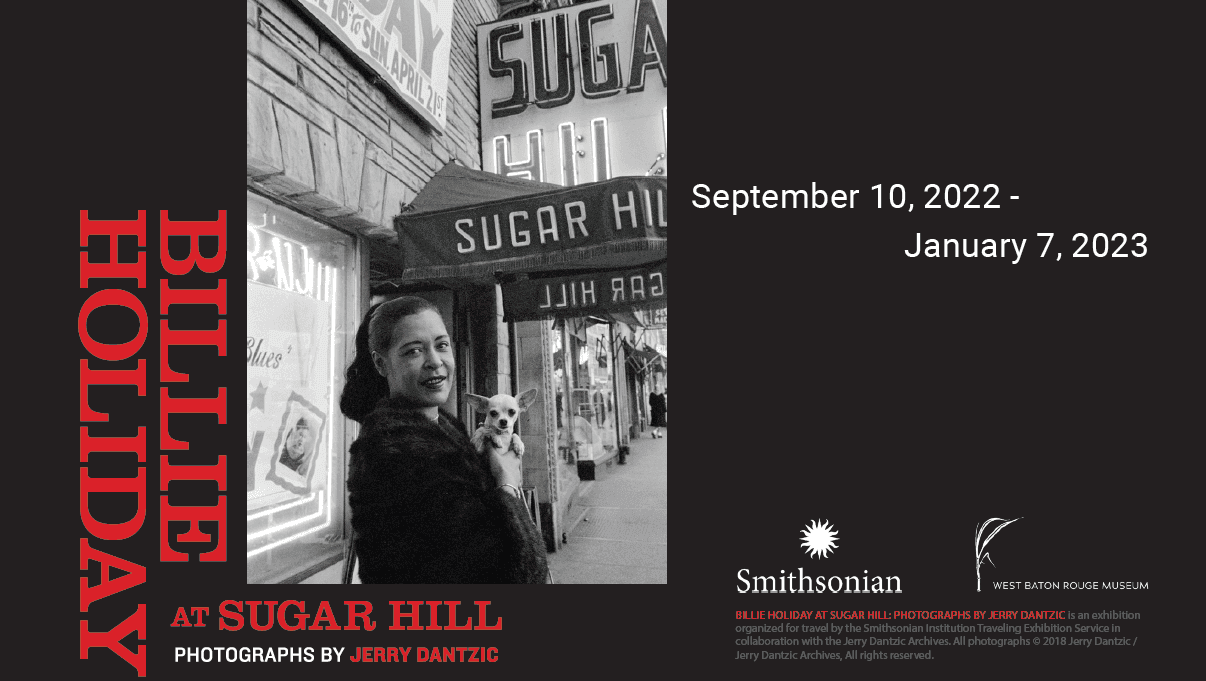 In April 1957, photographer Jerry Dantzic had an assignment from Decca Records to photograph Billie Holiday during a weeklong run of performances at the Newark, New Jersey, nightclub, Sugar Hill. What unfolded was an unexpected and intimate journey into her private and public worlds. His photos comprise the largest collection of images from any single Billie Holiday club engagement. Billie Holiday at Sugar Hill: Photographs by Jerry Dantzic presents 56 remarkable images of the jazz icon that challenge the tragic narrative that frequently defines her. The exhibition will be on view at West Baton Rouge Museum, September 10th, 2022 through January 7th, 2023.

Developed collaboratively by the Smithsonian Institution Traveling Exhibition Service (SITES) and the Jerry Dantzic Archives, the exhibition shows the elegance, complexity, star power and humanity of the consummate jazz artist. Dantzic’s discreet, respectful and artful approach, using only available light, helped forge a bond of trust between him and Holiday. The result is a series of striking images that presents her, not only on stage but also among her closest friends and family, projecting warmth, humor and tenderness. The photographer’s unparalleled access also captures Holiday encountering fans, strolling Broad Street in Newark, backstage and performing. Dantzic, an artist in his own right, masterfully captures these moments. The photographs document a significant period in Holiday’s life, just two years before her death at the age of 44.

The exhibition also includes Dantzic’s ephemera from his assignment photographing Billie Holiday’s engagement at Sugar Hill in Newark and at the 2nd New York Jazz Festival on Randall’s Island, both in 1957. Some of the objects to be on display include his Leica M3 camera, a photograph of him while holding the camera and his business card from late 1950s.

The exhibition is accompanied by the book “Jerry Dantzic: Billie Holiday at Sugar Hill, With a reflection by Zadie Smith,” published by Thames & Hudson.

SITES has been sharing the wealth of Smithsonian collections and research programs with millions of people outside Washington, D.C., for more than 65 years. SITES connects Americans to their shared cultural heritage through a wide range of exhibitions about art, science and history, which are shown wherever people live, work and play. For exhibition descriptions and tour schedules, visit sites.si.edu.