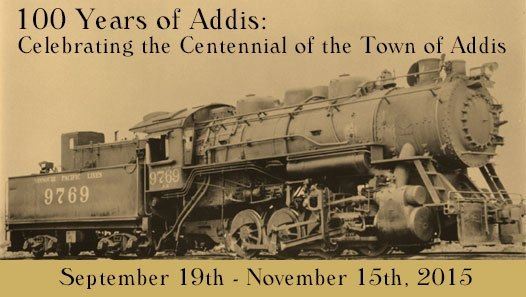 The West Baton Rouge Museum hosts the exhibition, 100 Years of Addis, which opens September 19, 2015, and runs through November 15, 2015, to help mark the centennial anniversary of the founding of the Town of Addis. While the developing railroads brought a community to settle the area as early as 1882, Addis, which was named for Texas Pacific Railroad official J.W. Addis, was not incorporated until September 1, 1915. Today the population of the town nestled along LA 1 in West Baton Rouge Parish is just over 4,000 residents and is growing.

The history of Addis is directly tied to the history of railroads in the parish. The railroad has been important to the growth of Addis, as many of the first buildings were built for the railroad and the business it brought to the town. The first mayor of Addis was a railroad man, George Booksh, as were many of the village administrators for decades.

Photographs and stories from the past 100 years of Addis history will be on display. The exhibit also features a grand 2-Rail O Scale model railroad on loan from the Greater Baton Rouge Railroaders. This 8 foot by 14 foot exhibit highlight was designed by Steve Griggs and Jim Buchtel using many recycled components.