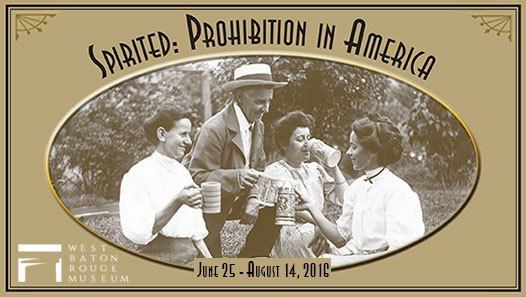 During the era of Prohibition, Americans no longer could manufacture, sell, or transport intoxicating beverages from 1920 until 1933. Spirited: Prohibition in America, a new exhibition opening June 25th at the West Baton Rouge Museum that explores this tumultuous time in American history, when flappers and suffragists, bootleggers and temperance lobbyists, and legends, such as Al Capone and Carry Nation, took sides in a battle against the bottle.

Organized by the National Constitution Center, Philadelphia, PA, in partnership with Mid-America Arts Alliance, Kansas City, MO, Spirited: Prohibition in America explores the era of Prohibition, when America went "dry." Visitors will learn about the complex issues that led America to adopt Prohibition through the 18 th Amendment to the Constitution in 1919 until its repeal through the 21 st Amendment in 1933. The country was split between "wets" and "drys," speakeasies flourished, legal authorities gave chase to gangsters, and many created inventive ways to circumvent the law. Through the exhibition, visitors will learn about the amendment process, the changing role of liquor in American culture, Prohibition's impact on the roaring '20s, and the role of women, and how current liquor laws vary from state to state.

The exhibition draws on the histories told from both sides of this divisive issue that riled passions and created volatile situations. In the end, after a decade of wide-spread corruption, wavering public opinion, and the need to generate revenue from an alcohol tax, the 18th Amendment became the first ever repealed. With the passing of the 21st Amendment, Prohibition ended on December 5, 1933 to a very different America. Today, Prohibition's legacy can be traced through state laws regulating alcohol, created to avoid the excesses before Prohibition and the corruption and lawlessness experienced during the roaring '20s.

The exhibit, Spirited: Prohibition in America, is based on the book by Daniel Okrent, Last Call: The Rise and Fall of Prohibition. The exhibit is made possible through NEH on the Road, a special initiative of the National Endowment for the Humanities.